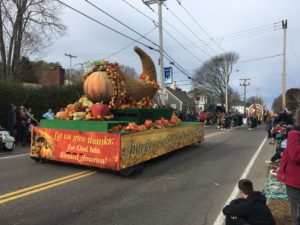 Ever since I can remember, I’ve loved going to a parade.  It doesn’t really matter if it’s a small town parade or a fancy one with all kinds of floats and fanfare.  It can be a 4th of July parade, a homecoming parade, or an Easter parade.  The crown jewel of parades is, of course, the Macy’s Thanksgiving Parade.  I was beyond thrilled to go for the first time during my college years, and was even more thrilled when I could take my own children.

This year, my husband found a new parade and suggested that we go.  It was the annual Thanksgiving Parade in “America’s Hometown” of Plymouth, Massachusetts.  It was the perfect fall day – a little overcast with a nip in the air.  The leaves were blowing around and it just felt so Thanksgiving-y.  The parade was organized in historical order of the settlement of the country through the years.  It recognized the first “autumn feast” in 1621 when the pilgrims who managed to survive that brutal first year celebrated the harvest with the Wampanoag tribe indigenous to New England.  There was a poignant float that was a tribute to the soldiers and nurses from World War 1.  And, there were any number of pilgrim groups, veterans, and people on horseback.  Best of all there were marching bands and drum and bugle corps. 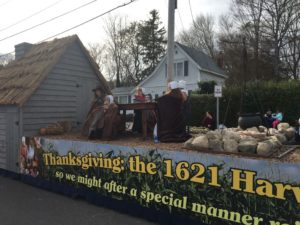 In fact, there were seven or eight different groups of drummers and buglers.  The first group to come by was called the Reilly Raiders.  Their flag noted that they were “senior” Reilly Raiders. I didn’t think much of that until the last line passed by and they seemed to be older – not seniors in high school, but maybe older folks.  Could they be Baby Boomers?  Some smaller groups and floats passed by, then another drum and bugle corps.  Oh my gosh, those in the color guard definitely had gray hair and wrinkles!  And, the musicians were way past high school age.  What was going on?  The corps that followed had the same general make up of people – they looked remarkably like me.  Could it be that folks in their 40s and 50s and even older, from all over the east coast, as well as Montreal, Quebec, were still marching in a drum and bugle corps?

Indeed, they were and going strong!  Baby Boomers who loved marching band and the glory days of the 1970s and 1980s corps competitions are still at it.  Who knew?   They looked like they were having a great time and the music was terrific.  Lots of patriotic and holiday favorites as only a brass band can deliver.  There were flag color guard and rifle regiments as well. Back in my day, the Phantom Regiment was the coolest of the cool corps.  The Blue Devils were super popular as well.   Now, it turns out there is a “senior” division that anyone can join.  They position themselves as “ageless”, but by the looks of the groups, the majority are retired or near enough to retire soon. 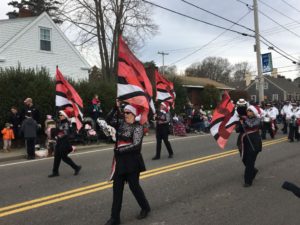 The Connecticut Alumni Corps describe themselves as follows:

“Founded in 1984 on the foresight and inspiration of former members of the Connecticut Hurricanes, the members have taken what many consider a hobby and created a top-notch musical unit, rich in the tradition and professionalism of what drum & bugle corps stand for.

Our membership comes from all walks of life, ranging from former members of other drum & bugle corps across the Northeast to several local high school and college marching bands.

Our hope is to continue to bring this exciting and inspirational art form to the general public by participating in many parades, concerts and exhibitions across the Northeast.”

The North Star Alumni Drum and Bugle Corps from Peabody, Massachusetts focuses on carrying on tradition and producing great performances:

The mission of the North Star Drum and Bugle Corps is to continue providing the special brand of visual and musical entertainment to audiences that was the hallmark of the original corps.

We do this in a manner that allows members who have careers and families to participate.

All of these “senior” corps have lengthy performance and parade schedules.  They travel to many different parts of the country and participate in keeping local celebrations alive with music.  The most interesting thing is how so many musicians have kept the torch lit as they age out of high school and college marching bands.  There are drum and bugle groups for Baby Boomers all over the country.

There is no shortage of things to do when you become empty-nesters and are creeping ever faster to retirement, or when you finally do retire.  Think back to those things you loved in high school or college.  Those same passions that gave you a creative outlet, a group of like-minded friends, and a strong sense of accomplishment are key to a happy retirement.  You might not be a drummer or a trumpeter, but there may well have been something you loved.  Take a look around and find an alumni group or a “senior” group to join.  You can be a performer or a volunteer to help run the group.  There is no shortage of organizations to explore and join.  It’s simply a matter of looking for opportunities in your everyday life.  You never know when you’ll find something interesting that sparks an old interest or passion, even at a local parade.

So, at this time of Thanksgiving, I find that I am grateful not only for my family and friends and a wonderful parade, but for the reminder that the next chapter can be as filled with things to do that are as important and as fun as they were in our younger days.  Happy Thanksgiving!