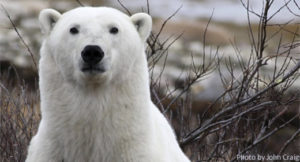 While I was commenting on the delicious menu choices to my friend, the gentleman next to us remarked that the lamb chops were an excellent choice.  The lady next to him chimed in that the three poultries was also a wonderful dish.  There began our engaging conversation with two of the locals.

Turns out Dave and Sheila met in college, “years and years ago”, as they like to say, and have been married for most of those years.  He had just retired; she has been retired for a couple of years.  He spent his career working in technical support at a university; she was a “lab rat” (his description, not hers) working in biomedical research during her forty-year career.  They just returned from a 2-week expedition to Churchill, Canada where they went on a trek to see polar bears.  Wow!  That is one way to plunge into retirement.

They were excited to talk about this amazing adventure they had with a group of retirees.  They went on an educational “field trip” and experienced beautiful landscapes, animals in their natural habitat, and the Northern Lights.

They decided that they’d like to kick off their retirement in a big way, doing something really memorable and different to mark this new chapter.  While excellent options, they didn’t want a party or to go on a cruise.  They wanted something more out of the ordinary, unexpected, and uniquely theirs.  Sounds like they’ve defined their view of retirement!

Dave hasn’t figured out yet how he wants to embrace retirement. He likes to tinker and with his technology background, he imagines that he’ll find much to do in the technology field.  He’s not opposed to doing some part-time work, but definitely does not want any kind of big commitment or a role where he would have ongoing obligations to others.  He volunteers at his church and may increase time helping to run things there.

Since Sheila has been retired for a couple of years now, she’s gotten into a groove. And, she loves it.  In fact, she is too busy to do housekeeping and regular tasks.  We all laughed when she said with great conviction, “I’m too busy to make dinner…I’m looking for polar bears!”

She did a lot of the research to find out about the polar bears and their habitat.  She wanted to be well-prepared for this trip, not only knowing about the bears, the issues facing them today, and the way they live, but also about the gear they would need to weather the weather.  Churchill is what she referred to as a “natural” environment with much more rugged terrain than the local streets of Tennessee!

Just getting to Churchill is an adventure in and of itself.  It involved planes, trains, automobiles, as well 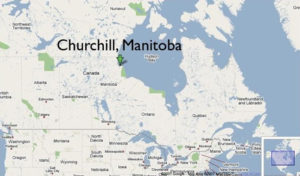 as boats and snowmobiles.  It’s not your average retiree destination, so gearing up was necessary.  Churchill is in Manitoba, Canada.  Way, way up on the Hudson Bay.  It has the dubious distinction of being nicknamed the “Polar Bear Capital of the World” and the “Beluga Capital of the World.”  The location on the map aptly describes this tiny town of 899 people.  To say it is remote is an understatement.  It’s nearest neighboring town is some 250 miles to the south!  (And, it’s referred to as a larger settlement rather than a town.)  Getting there takes effort and the luck of Mother Nature.  There are few scheduled flights from Winnipeg and occasional rail service.

Dave and Sheila had to prepare for weather.  The height of polar bear season is October and November, so they could expect temperatures of around 35 degrees (F), the average for October.  The record low is negative 12 (F).  They would not be staying in a luxury hotel and fortunately not in a tent.  But, accommodations were “rustic”.  They also spent a great deal of time in all-terrain vehicles made for the Arctic weather conditions. 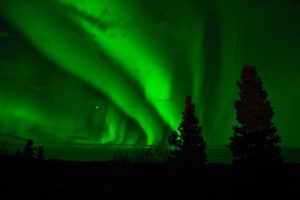 All of the preparations and planning and the 28 hours of travel to get there were well worth the effort.  They arrived late that first evening, exhausted, so they went right to bed.  A couple of hours later they heard a knock on their door.  Their guide let them know that the Aurora Borealis was fabulous that evening and they really shouldn’t miss the opportunity to see it.  So, they pulled themselves up, dressed for the freezing wind, and took in a magnificent sight.  Dave commented that they reminded themselves that they’ll have the rest of their retirement to catch up on sleep.

They had several opportunities to go out with the tour group to polar bear areas.  They spent hours in “tundra buggies”, specially designed buses for use during polar bear “tourist season”.  They did have up-close and personal views of these gorgeous creatures in their habitat.  The bears are enormous.  There were hundreds of them roaming around at the edges of the Bay at times; other times, our intrepid couple saw small groups and what could have been families.  To say they took a million pictures might be an exaggeration, but only slightly.  They were completely enamored with their time in nature, seeing how these bears live, look for food, and play.

The two weeks flew by.  They had an experience beyond what they could have hoped for, met wonderful new people, and tried new foods.  In the era of climate change concerns, they feel fortunate to have seen such creatures in their natural habitat.  They both agreed that this was a trip of a lifetime and an amazing way to officially kick off their retirement together.  Where retirement takes them next, well, they aren’t quite sure.  They are, however, confident that they will enjoy their new-found freedom.  And, Sheila is sure she won’t be making a lot of dinners going forward!

Looking to trek to Churchill to see the Polar Bears?  Read up and plan well.  Enjoy!

A good overview of Churchill, its geography, climate, etc. is on Wikipedia.

The Everything Churchill website has terrific photos and information about planning your trip to see the polar bears.

Read more about the polar bear’s situation with global climate change and the effects on their habitat.