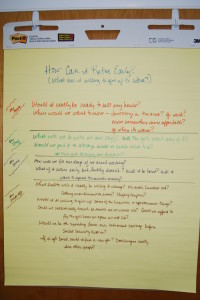 Just thinking about some of the key topics I would need to resolve if I were going to retire early.

I got an unexpected basket of good advice on a recent airplane trip.  Traveling back home on a puddle-jumper from Virginia, the seats were even closer together than on the regular uncomfortable coach seats.  It was a cozy setting to get to know your neighbor.  That’s where I met Doug, an older gentleman who patiently waited while I got situated in my window seat.   He asked if I would hold his coffee while he got squared away, and our conversation got started.

Doug was a very nice man in his late 60s.  He was heading home to Philadelphia after a week-long visit with his daughter and her family.  He had just met his newest granddaughter, who was just six weeks old.  She joins a big brother and two older cousins who live on the west coast.  He mentioned that after the winter we had up north, he was wondering if he should move closer to one of his daughters and grandkids since both live in much warmer climates.  But, he likes his living arrangement in Philly so much that he thinks he’ll stay put for now and continue to fly out for visits several times a year.

Doug is retired and “loving every minute” of it.  Back in the late 1990s, he tinkered with the idea that he might like to retire early.  He was approaching his 30-year work anniversary in fundraising and public relations.   He had a punishing schedule for all those years while raising his girls, and was ready for a quieter and more manageable life.  At the time, he and his wife were divorcing, his older daughter settled in California and his younger daughter was graduating from college.  He decided it was time to reassess his situation.  After taking stock of his priorities, wishes and wants, he surprised himself.  Turns out he was very willing to give up a fair number of material things in order to retire early.

So, at 55, he retired.  He sold his big house in the suburbs of Philadelphia and most of the furnishings.   He opted for a 1-bedroom co-op in the heart of the city.  It’s in a desirable area with public transportation, shopping, groceries, and activities right outside his door.  He sold his car and declared, “That was the best day of my life!” He does not miss that car, the commute or the traffic one bit.  He has mastered the public transportation system and walks several miles most days.  Doug says that making those changes, shedding all of his big material goods, was so liberating that he’s never once looked back.

He found that he enjoys cooking and experiments with new recipes frequently.  He goes to the market for fresh produce and new ideas two or three times a week.  While never much of a recycler, he finds that he is now mindful of not wasting.  Managing to a budget is not that hard, and it keeps him focused and more creative.

Doug’s daughters are clearly the light of his life.  He has a new computer so that he can stay in close touch with his grandkids by Skyping every week or so.  He has become a fan of frequent flier miles that he accumulates on his credit card.  He pays for everything on his rewards credit card and manages to get several trips on miles each year.  His circle of friends continues to expand, between meeting new people in his building and at events he attends in the city.  He’s also stays in touch with many colleagues and friends from his working years.

Doug keeps close tabs on what’s going on in Philadelphia and has been amazed at how many activities are free.  There are events at the public library and museums in the area that he attends such as lectures and concerts. He’s not so interested in online courses or MOOCs.  He didn’t move to the city to “stay cooped up in his co-op.”  Doug says that it’s important to develop new interests and stay very active, especially if you retire early.

Doug is clearly passionate about retirement.  He said that more people can retire early if they are just willing to give up some of their things.  “People think they need a lot more money in retirement than they really need,” Doug told me.  He has a small pension, Social Security and still has money left at the end of the month.  He encouraged me to take a close look at what I really want as I move into my mid-50s.  He said that he simply “loves the freedom” that retirement affords him.  I think Doug is on to something…I will dig deeper into my plan and ask some of the hard questions. What am I really willing to give up?  What am I willing to trade for a simpler, freer lifestyle?  Where would I really like to live?  And, do I really need a swimming pool at my new house?

How about you?  What would you be willing to give up to retire early?

Resources to help you decide if you can retire early:

6 criteria to use as a guideline